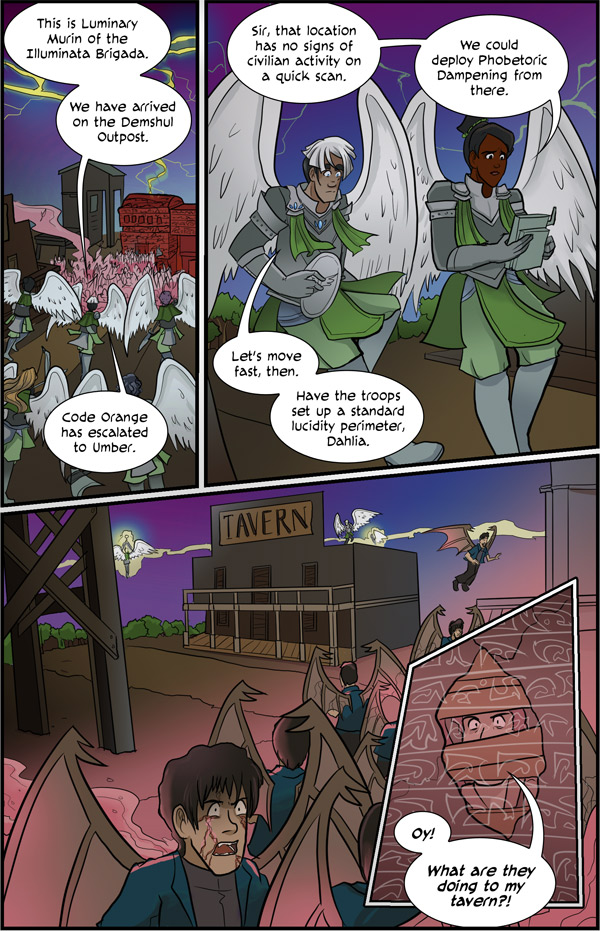 Some new customers at the Batallia Tavern. (This would be a GREAT time for any $6+ Patrons to brush up on the Kanite Emergency codes...)

I did an interview this week! Robin Childs, creator of LeyLines and extraordinary person in general, talked to me about what's changed since I started Sombulus, the time I met the fastest Etch-a-Sketch artist in the world, and the Webcomic Alliance Kickstarter, which is ending this week! Give it a listen!

And just in time for Halloween, there's some seriously creepy stuff in this last batch of new SpiderForest comics.

Bonabyl: Two mischivous boys go to a magic school, but when one's fear of the dark transforms into... more corporeal manifestations, every bump in the night and spooky house becomes a threat that could swallow everyone. This one's really early but has a lot of fun action already!

Littlelight Asylum: In a strange orphanage where the little monsters really are little monsters, three friends are constantly getting themselves in supernatural misadventures. Short fun stories about creepy kids!

The Magpie: A sinister monsterous force keeps the wintery town of Pinewood isolated, and Amanda wants out. A newcomer, Trixie, moves into town, and gives Amanda hope and smooches. Can Amanda and Trixie fight back against the monster? Or will it claim them as its own?

Bonus Comic for $6+ Patrons Do worlds have any OTHER effects on characters besides changing their art styles?